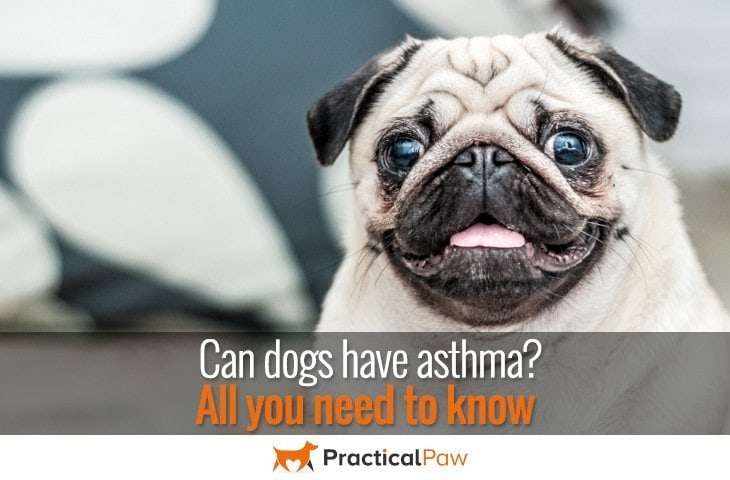 Can dogs have asthma? The simple answer is yes. However, asthma in dogs is less common than in either cats or humans. Nevertheless, dogs can develop breathing difficulties and exhibit asthmatic symptoms.

In most cases, though, dog asthma or allergic bronchitis, as it’s also known, is an allergic reaction to something in our dog’s environment.

What causes asthma in dogs?

There are many possible causes of asthma in dogs. Just like us, our dogs can have allergic reactions to airborne irritants such as pollen, dust, or pollutants.

Although asthma attacks in humans can be random in the case of our dogs, they are much more likely to be caused by an external trigger. Unfortunately,  there are a lot of possible allergens, many of which we use every day. So narrowing down what may have caused an asthma attack is not always easy. However, recognizing some of the more common triggers can be useful;

Dogs that are more susceptible to asthma attacks tend to be older, small breed dogs. Also, brachycephalic or short-muzzled dogs may be prone to asthma symptoms because their airways are already partially obstructed.

Despite this, if your dog, large or small, is having difficulty breathing, you should seek veterinary advice immediately.

When your dog is exposed to an allergen, its immune system becomes activated. Once in action, your dog’s immune system produces a protein called histamine. This naturally occurring compound is an important part of the body’s defense system. Histamines increase blood flow to the areas of the body affected by the allergen. This increase in blood flow, in turn, causes inflammation.

As a result of the inflammation, the immune system sends other chemicals to the affected site to repair it. Consequently, the bronchial tubes responsible for carrying air in and out of the lungs become inflamed. Also, mucus is produced that leads to the tubes becoming blocked, causing a restriction in the airways that leads to difficulty breathing.

What are the symptoms of asthma?

Not all dogs will have the following symptoms. Similarly, a dog that does have them doesn’t necessarily have asthma. Look out for any of the following signs of asthma attacks in dogs, which can range from mild to severe;

If your dog has asthma, getting an early diagnosis for your dog is vital. Not only is a severe asthma attack potentially life-threatening, but other underlying problems can cause breathing difficulties.

How is asthma diagnosed?

Your veterinarian will take a complete history of the onset of asthma symptoms. In addition, X-rays of your dog’s chest and blood samples may also be needed.

Since bacterial infections, heartworm and lungworm, and several other conditions also cause breathing difficulties, these need to be ruled out. Assuming that your dog does have asthma, it will be either Chronic or Acute.

Chronic bronchitis lasts or re-occurs over a long duration.  Often caused by the most common allergens such as mold, dust, and pollens.

It affects the bronchi and bronchioles, which are the smaller airways that lead from the windpipe. Continuing inflammation in these airways can cause permanent damage to the tissues lining the respiratory tract. As a result, permanent blockages and irreversible narrowing of the airways are possible.

Acute bronchitis is an allergic reaction and often occurs just once or several times but within a short time. Despite acute bronchitis affecting breathing in a similar way to chronic bronchitis, in contrast, the changes that happen within the dog’s airways are reversible.

How is asthma treated?

Discovering the underlying cause of dog asthma is essential. Sometimes this is straightforward. If your dog experiences an asthma attack shortly after you’ve introduced a new product into their environment. The chances are that the new product is an allergen.

On the other hand, it may not be easy to tell what is causing your dog’s asthma. For this reason,  you may be asked to keep a diary of your dog’s asthma attacks to try to determine the irritant.

Once the allergen is discovered, then removing it from your dog’s environment should solve the problem. However, if the trigger cannot be found, ongoing treatment for your dog may be required. There are several treatments that a vet may prescribe, all of which are designed to open the airways and reduce inflammation.

Antihistamines work by preventing histamine from attaching itself to the cells of the body. These drugs reduce swelling as well as limit the production of mucus, easing symptoms.

Steroids are used to reduce inflammation. Often delivered by an aerosol chamber. Dogs will need to be introduced to the chamber gradually until they get used to it.

Occasionally secondary infections can be the trigger for an asthma attack. In these cases, antibiotics are prescribed to clear the infection.

Bronchodilators are drugs designed to relax the bronchial muscle, allowing more air to pass through into the lungs. These may be prescribed as oral medications or via an aerosol chamber.

How can I stop my dog from having future asthma attacks?

The most efficient way to prevent a future asthma attack is to identify and remove any potential asthma triggers from your dog’s environment.

Keep your dog’s environment as clean and dust-free as possible. Equally, minimize your dog’s exposure to household cleaning products. In addition and arguably, most importantly, ensure that your dog is a healthy weight. You can also try a humidifier to help keep the air around your dog less dry.

Can dogs have asthma?

Yes, they can.  The most common cause of asthma in dogs is an allergic reaction. The allergen prompts our dog’s immune system into taking action, and histamine is released. This reaction causes inflammation restricting the flow of air in and out of the body, making it difficult to breathe. An early diagnosis is vital to rule out any other possible causes and prevent the symptoms from becoming worse.

So if your dog does have difficulty in breathing, contact your veterinarian immediately. In most cases, the treatment may be short-term. Once the irritant is removed from your dog’s environment, they may never experience another attack. Sometimes, however, long-term treatment options are required to control the symptoms and help your dog live a full and happy life.