Knowing how our dog perceives their world opens up a new level of understanding that can be really valuable, especially when it comes to training. But do our dogs have good eyesight?

Most of us know that our dogs’ view of the world may be different to ours. But that doesn’t mean that it’s inferior. What they may lack in some areas they make up for in others.

So how do our dogs ‘see’ the world? Let’s look at the basics.

Although it’s a common belief that dogs only see in black and white or greyscale, it’s not true. Dogs do see colour, but they see in a much more limited colour range than we do.

In normal human eyes we have three types of colour sensitive cones, red, green and blue. In contrast, dogs only have two: yellow and blue.

The central area of the retina in our eyes contain 100% cones compared to our dog’s that contains only 20%. It’s estimated that because of this our dogs are five times less receptive to colour than we are. 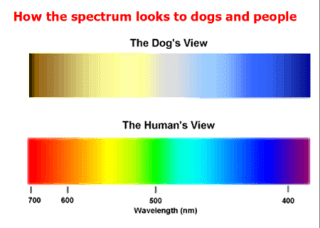 Despite being unable to distinguish between red and green, it doesn’t mean that dogs are unable to see objects in those colours. It just means that they can’t tell the difference solely based on colour.

However if you throw a red ball into grass, your dog may still be able to find it. This is because red objects tend to appear darker than green objects.

Although our dog’s colour vision may not be as rich as our own, they do have the advantage at night.

Our dog’s vision has evolved with a much higher percentage of rod receptor cells than our own. Rods are adapted to work in low light conditions and are sensitive to motion.

Not only that, but our dogs have larger pupils than us that let in more light. Combined with the fact that the retina and lens of our dog’s eyes are closer together than our own means that the images they receive from the world around them are much brighter.

But perhaps the biggest difference between our own and our dog’s night vision or ‘crepuscular predatory vision’ as it’s also known is that our dogs have something called the tapetum lucidum.

The tapetum is a layer of tissue behind the retina that acts a little like a mirror.  Which is why is our dog’s eyes glow at night. The tapetum increases the light available to the photoreceptors in the eyes by reflecting visible light back through the retina.

Although this process blurs the image. Lowering our dog’s visual acuity to around 20:80 vision as opposed to our 20:20 vision. Combined with our dog’s superior ability to detect motion it means that their vision in low light is far better than our own.

Our dog’s have much better peripheral vision than us. As their eyes tend to be located more to the sides of their head, they enjoy a much wider field of vision than we do.

Depth perception relies on both eyes working together in what’s called the central or binocular field of vision. As our dog’s eyes have much less of an overlap due to their position, it’s estimated that our dog’s depth perception is around half of that as humans.

This goes a long way to explain why some dogs find it difficult to catch a treat if it is thrown directly towards them. As they have a blind spot down the middle of their face.

Although our dogs have greater night vision and better motion detection than we do, they are near sighted.

If you ever have trouble getting your dog’s attention, try moving from side to side and waving your arms. You are much more likely to get a reaction than if you are standing still straight in front of them!

Despite our dog’s eyesight being rather short they make up for it in other ways. Our dogs rely on their other senses much more than they do their sight.

Our dog’s sense of smell is estimated to be between 1,000 to 10,000 more sensitive than our own, and it’s how most of our dogs choose to explore their world.

When your dog stops at every bush and lamp post (reading his pee-mail); they are ‘seeing’ much more information with their nose than with their eyes.

Do dogs have good eyesight?

Our dogs may not have the same colourful and detailed view of the world that we do. But their eyesight has evolved to work perfectly for hunting at low light.

With enhanced night vision and motion detection combined with their other more developed senses, like smell and hearing, they explore the world just as effectively as we do.

Understanding the difference in the way that we see information can enable you to help your dog, especially when it comes to training.

If you want to teach your dog to catch, remember that your dog has a blind spot in front of their nose, down the middle of their face. So it can help them if you throw the object slightly to the side.

Feeling frustrated with recall training? Then wave your arms around so that your dog tunes into the movement. If you are some distance away and standing still they may not even see you.

Do dogs have good eyesight? Our dogs may see the world differently than us, but their eyesight is just one aspect of how they explore their world they ‘see’ perfectly well in their own way.

Not in the way that we see green. Green, yellow, red and orange will just appear to be different shades of yellow to your dog. So if your dog loves to chase a ball get a blue one!

Do dogs need light at night?

Dog’s eyes are much better adapted to see in low light levels so they can navigate easily with very little. However if it was completely pitch dark they would struggle to see anything just as we would.

Yes, the nearest comparison that can be made is that dogs see colour in a similar way to someone that is colour blind. They do perceive colour but just not in the way that most of us do.

Are dogs able to see TV?

There is debate whether dogs can actually watch TV in the traditional sense. As dogs react to movement it could be that they are just attracted to the movement and the sound of the TV rather than the content itself.