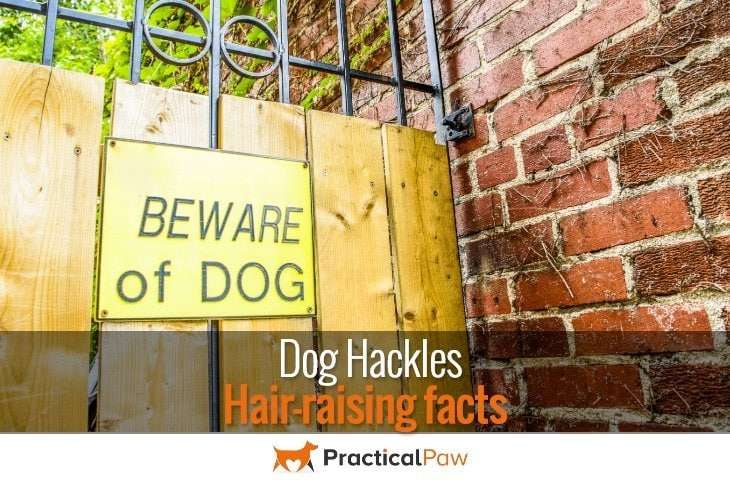 Whether you’ve got a feisty Fido or calm canine, you’ve probably, at some point been aware of your dog’s hackles. For many owners, the raising of the fur along a dog’s back and shoulders is cause for alarm. As most people associate it with aggression.

But raised hackles are a much more sophisticated form of communication than that.  Depending on the situation and the rest of your dog’s body language the meaning may differ. So here are our hair-raising facts about dog hackles and what they mean.

What are dog hackles?

All dogs have hackles, whether you’ve seen them raised or not. They run all the way from a dog’s neck, along the back to the base of the tail.

When a dog’s hackles rise, it is an involuntary reaction to something in the environment. It’s a bit like us getting goose bumps when hearing a great piece of music or see something emotional.

Technically referred to as piloerection raised hackles can appear in one just one area or over the dog’s whole back.

The hair and skin in these areas are served by special muscles called arrector pili that are capable of lifting the hair and puffing it out.

And these muscles are part of the sympathetic branch or fight or flight side of a dog’s autonomic nervous system.  Meaning that a dog has no active control over them.

The four F’s of hackle-raising

Our dogs, like us, experience stress. Sometimes this is in the form of an unknown dog or new situation or a loud noise for example.

When something is perceived as a threat, the sympathetic side of the nervous system steps up to prepare the body for action.

Typically this is referred to as the fight or flight response, but these aren’t the only responses that are available.

Dogs also use freeze and fidget responses in answer to stress. But the physiological changes are the same.

When the fight or flight response is activated adrenaline is released into the body along with stress hormones like cortisol.  The body gets a boost in energy, heart rate quickens, and hackles raise to communicate arousal.

What our dogs see as a perceived threat varies from dog to dog. Some dogs are very chilled out while other dogs are much more anxious.

One of the difficulties in identifying what your dog finds stressful is that sometimes it isn’t a single event. But rather a build up of mild stressors over a period of time.

Often these stacked stressors are what cause people to say ‘it came out of nowhere’ when a dog bites.

The truth is often that the dog has been overwhelmed by multiple situations that have made it anxious, afraid, excited, unsure, or irritated.  But each incident in itself has been below the threshold of immediate threat.

Once a dog has too many of these incidents they snap, similar to when we say ‘the last straw broke the camels back’.

Common stressors for dogs include;

But without a doubt the most common occurrence of raised hackles is when one dog meets another. So what does it mean?

Raised hackles are often associated with aggression and with good reason. As it is most often seen when dogs meet.

Unfortunately, this sometimes leads to a scuffle, and so hackles have been linked to aggressive behaviour.

But it is much more likely that your dog is feeling unsure or excited or curious when they meet another canine, and the hackles are just a sign of a heightened emotional state.

Linked to the flight response fear also triggers raised hackles. When dogs are fearful, they still experience the involuntary trigger of the sympathetic nervous system.

In some cases when a dog is unsure of something as soon as they get close enough to sniff the object the fear response disappears.

This can happen with any new object, person or situation and frequently occurs when dogs catch sight of something that looks unusual.

It may seem unlikely, but excitement and fear generate the same response in the body as each other. It’s why a lot of people enjoy horror movies.

Overexcitement can trigger the hackles to rise in the same way that fear does. This includes play, hunting, chasing, being stroked and introductions into new environments.

So how can you tell if a dog is aggressive, fearful or excited?

As your dog can’t control when or if its hackles rise it’s important that you do your best to read the situation.

Hackles just let you know that your dog is experiencing arousal in some way. It’s up to you to look at the rest of your dog’s body language and assess the situation.

If you think your dog is experiencing stress or has become overexcited remove them from the situation if it’s safe to do so.

Understanding a dog’s body language is not always easy, but if your dog looks relaxed and happy, but their hackles are raised, they are probably just excited.

But if your dog’s body goes stiff, seems uncomfortable and has raised hackles when another dog is present you may want to distract them and move them on quickly.

Similarly, if your dog is trying to hide behind your legs while their hackles are up, they are more likely to be experiencing fear, and you need to reassure them or remove them from the situation.

Not all hackles are created equal

If you have trouble reading your dog’s body language, there is another way that you can get information about your dog’s mood.

Although there isn’t much science to back these claims up, there is anecdotal evidence to support that the position of the raised hackle is a determining factor in the mood it represents.

You know your dog best. If you think they are in a situation that is making them uncomfortable take them out of it.

Despite concerns that raised hackles mean that a dog is about to get aggressive it’s not always the case.

Any situation that your dog is unsure of is excited by, fearful of or unhappy with can cause the fur on their back to stand up.

If you’ve never seen your dog’s hackles rise it doesn’t mean they don’t have them, all dogs do. It’s just much easier to see hackles on dogs with short straight hair than it is to see on any other type of fur.

It’s  important to look at the whole picture when a dog’s hackles are raised and not to jump to conclusions. You know your dog best so take appropriate action based on your dog.