Mange is a disease that affects a dog’s skin. Caused by microscopic mites that live on or in the skin it causes itching and mild to severe skin infections.

Despite there being over forty-eight thousand different species of mites, including ear mites  and seasonal harvest mites. The two most common causes of mange in dogs are the Demodex Canis mite and the Sarcoptes scabei mite.

How do dogs get mange?

Despite there being over forty-eight thousand different species of mites, including ear mites and seasonal harvest mites. The two most common causes of mange in dogs are the Demodex Canis mite and the Sarcoptes scabei mite.

The Demodex Canis mite is an eight-legged, cigar-shaped parasite that lives on the surface of its host. It lives and feeds in and on the hair follicles and oil glands of the skin.

Also known as red mange, it causes hair loss and red, inflamed skin. Localised infection appears mainly on the face. While a generalised infection can spread widely to other areas of the body.

There is also a form of Demodectic mange that only affects a dog’s feet. Known as Pododermatitis it can be tough to treat.

How did my dog get Demodectic mange?

It’s thought that the Demodex Canis mite lives on most dogs without it causing an issue. A healthy dog’s immune system will usually be able to overcome an infestation and repair any damage caused.

Because of this, Demodectic mange is self-limiting. In that the dog will eventually be able to remove the problem themselves. Once the infestation has gone. Most dogs do not get this type of mange again as their immune system builds up a defence against it.

Since Demodectic mange occurs mainly around the face, if it becomes more generalised and spreads. It could be an indicator that your dog has a compromised immune system.

Despite red mange being classed as non-contagious. When a puppy is born the mother will transfer Demodex mites via skin to skin contact shortly after birth.

As these parasites commonly live on dogs anyway, this isn’t usually an issue. That is unless the infestation becomes problematic and the puppy develops excessive hair loss or skin lesions.

Most dogs will develop a strong enough immune system by the time they are eighteen months old for the Demodex mite to no longer present an issue.

However, hereditary Demodectic mange is not the inheritance of mites from mother to puppy. But rather the inherited lack of specific antibodies that will fight against an infestation of these parasites.

Specific breeds including, the Pug, Shar-pei and Old English Sheepdog are more prone to bouts of this type of mange because of the lack of antibodies in their system. 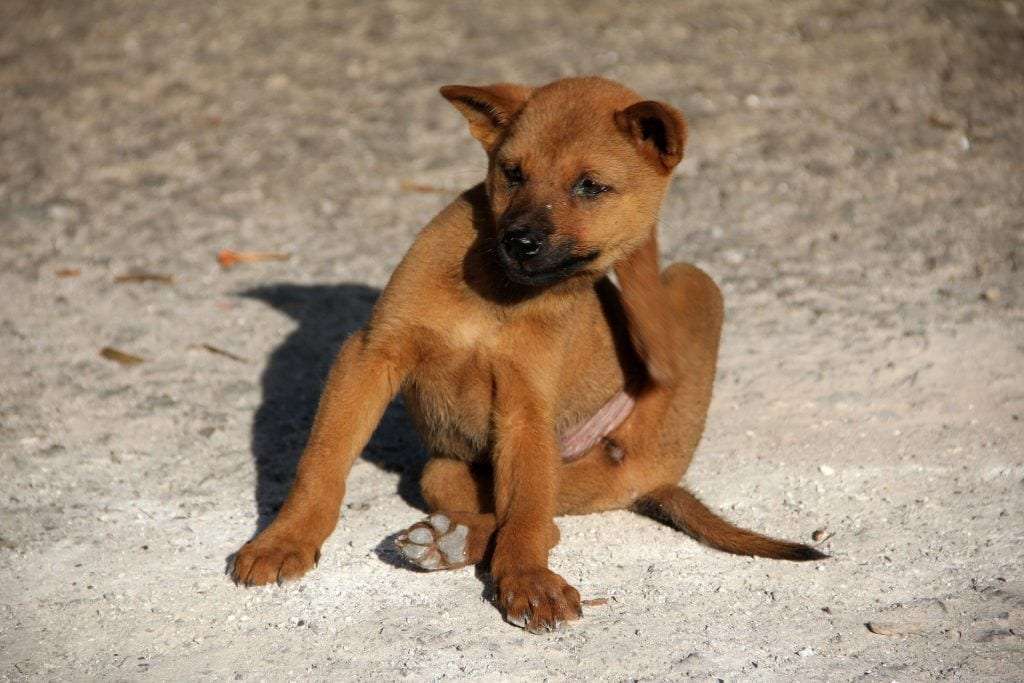 Sarcoptic mange or canine scabies as it is also known it highly contagious. Female Sarcoptic mites bury themselves into the upper layers of a dog’s skin forming tunnels in which to breed.

The tunnelling by these mites causes severe itching and skin inflammation, made worse by a dog scratching. As the infestation increases, open wounds appear that quickly become scabby, crusty and swollen.

Typically this type of mange affects the whole body, starting in areas that don’t have a lot of hair. The infection can spread quickly with excessive scratching, hair loss and sores being common indicators of an infestation.

How do dogs get Sarcoptic mange?

Unfortunately, Sarcoptic mange is easily spread. Dogs can transfer the mites to each other as well as pick them up from infected bedding, grooming tools and other animals like foxes.

Despite the severity of symptoms, some dogs do not show any outward signs of being infected by the mites and can spread the infection quickly.

Regrettably, the Sarcoptes scabei mite is an unfussy feeder and can transfer its attention to a human host. If you suspect that your dog does have mange and you develop intense itching, you will need to visit your doctor.

How is mange diagnosed?

If you notice your dog scratching more than usual or if bald patches and or sores appear then a trip to the Vet is needed.

Your veterinarian will take a skin scraping or biopsy of the affected area. As the mites are too small to see with the naked eye. The sample will be examined under a microscope to check for signs of infestation.

Since Demodex mites live on all dogs, the presence of these parasites doesn’t automatically mean that your dog has mange. However, if the mites are present and your dog also has skin lesions. Then a diagnosis of Demodectic mange is likely to be made.

Sarcoptic mange is trickier to diagnose as a skin scraping may not reveal the presence of mites. As the Sarcoptes scabei  mite tunnels into your dog’s skin. Only a small percentage of infected dogs will have a positive skin scraping.

However, if the skin scraping does prove positive for the presence of mites, then a diagnosis can be made quickly.

If these parasites are not present it doesn’t necessarily mean that your dog does not have canine scabies. Your vet will take your dog’s history into account to rule out allergies and other conditions that may create itching.

If your dog does have mange outbreak, treatment will vary depending on the type of mange they have.

As Demodectic mange is non-contagious, there is no need to keep your dog isolated. The Demodex mite lives and dies on the host dog. Growing from eggs to larvae to nymphs and finally to adults in a life cycle that takes twenty to thirty-five days.

As the mites cannot live independently of a host. There is no need to treat your dog’s bedding or the wider environment. However, your dog will need treatment.

Depending on the severity of the infestation your vet may recommend oral or topical medication. As well as medicated shampoos or dips.

Since Demodectic mange is the result of a compromised immune system. It is more common for young and older dogs or dogs that are already in failing health.

Unlike Demodectic Mange, Sarcoptic mange is highly contagious. Dogs with canine scabies must be isolated to prevent the infection spreading.

Unfortunately, the Sarcoptes mite can survive without a host for several days. Which means that it’s essential that treatment includes your dog’s bedding, collar, toys and wider environment as well as your dog.

Your vet may prescribe several medications both for external and internal use to combat both the mites and any secondary skin infections.

It’s important to follow your vet’s advice carefully as these treatments can have toxic side effects.

How do dogs get mange?

It depends on the type of mange.

Demodectic mange is a non-contagious form of the condition that only usually occurs in dogs that have suppressed or weak immune systems such as puppies or older dogs.

Most dogs live in harmony with these tiny parasites and never experience issues. Despite this, however, particular dogs inherit a lack of the antibody that fight these mites, and this is commonly known as inherited Demodectic mange.

Dogs with inherited Demodectic mange should not be bred as they will pass the condition down to their puppies.

Sarcoptic mange is a highly contagious form of the condition. Dogs can not only catch it from other dogs but also from an infected environment or other animals such as foxes.

It’s vital that both these forms of mange are dealt with quickly. So if your dog has hair loss, lesions or seems exceptionally itchy do take them to see your vet for an early diagnosis and prompt treatment.

1 thought on “How do dogs get mange? Keep a lookout for this painful pest”