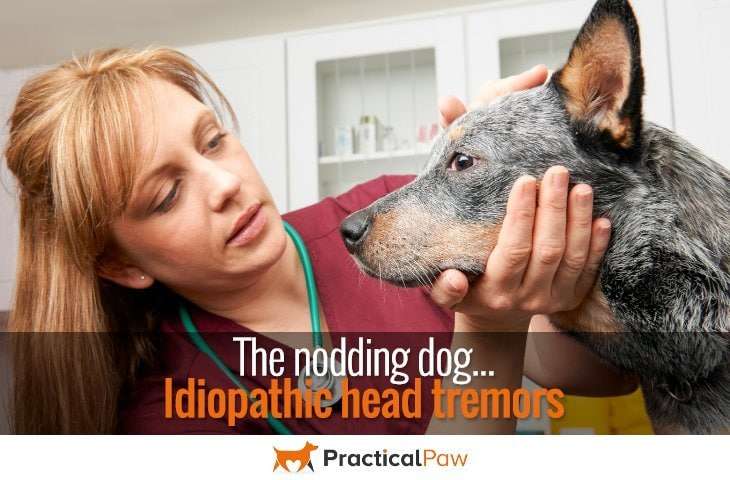 If you’ve ever witnessed your dog have an episode of head tremors, it can be terrifying. Idiopathic head tremors usually present as quick nodding movements either side to side or up and down. It is almost as if your dog is shaking their head ‘no’ to something or shaking its head ‘yes’ to something.

Despite looking quite alarming, affected dogs remain conscious throughout an episode. They may even carry on as though nothing is happening and remain undisturbed by the movement. Individual episodes typically last around 3 minutes.

What are head tremors in dogs?

The tremors are completely harmless. Although it can look like your pet is having a seizure while they’re experiencing the symptoms, they’re actually ok. Your dog will usually remain fully alert throughout the episode. In fact, most of the time, your dog may not even seem to notice that its head is moving. You may find that they continue about their normal doggy business as if nothing’s happening.

Despite there being no known cause for idiopathic head tremors in dogs, there are thought to be some contributing factors that may or may not be involved in the condition.

Despite there not being a definitive cause, some possible factors may contribute to the occurrence of idiopathic head tremors.

What can I do when my dog is having an episode?

It’s more than likely that your dog won’t be concerned or even notice that they have head tremors. Most of the time, your dog will only react to an episode of IHTS based on your response to it.

So it’s important not to panic and remember that apart from the involuntary movement of your dog’s head, your dog will otherwise be unaffected. They will not be in pain or distress, and the tremors don’t present any danger to your dog.

Although it can be distressing to watch, especially if you see it for the first time, your dog won’t be bothered by it, and it will stop within a few minutes. If you feel that you really need to do something, evidence suggests that distraction will considerably shorten the episode.

A 2015 study by Veterinary Medicine International found that in 87% of cases, the head tremors could be interrupted or stopped by calling the dog’s name, offering it food, asking the dog to perform a task, or when the dog voluntarily turned its head to one side. Personally, I also found that gently massaging my dog’s neck also shortened the episodes.

What if it’s not idiopathic head tremors?

Other conditions can cause head tremors. It’s always wise to get your dog examined by a veterinarian for diagnosis to rule out other more serious conditions.

Despite idiopathic head tremors being harmless, you should always seek veterinary advice. This is especially true if your dog starts having episodes later in life.

The process of exclusion diagnoses IHTS. That means that all other possible causes need to be investigated first before head tremors are considered idiopathic. These can include inner ear disorders, epilepsy, movement disorders, and neurological conditions.

It can be beneficial if you can take a video of your dog while having an episode. This can help your Veterinarian actually see what is happening.

Because idiopathic head tremor syndrome is not a serious health issue and has no lasting impact on the well-being of your dog, there isn’t any treatment for it. However, it is recommended that if you do have a dog with IHTS, you don’t breed them as it may be an inherited condition.

If the appearance of your dog having head tremors bothers you, then distract your dog until the tremors subside. Even if you are used to your dog having episodes, if any episode lasts longer than 10 minutes, take your dog to the vet.

The video clip below shows you exactly what head tremors look like, and you can tell that the dog is completely unfazed by them.