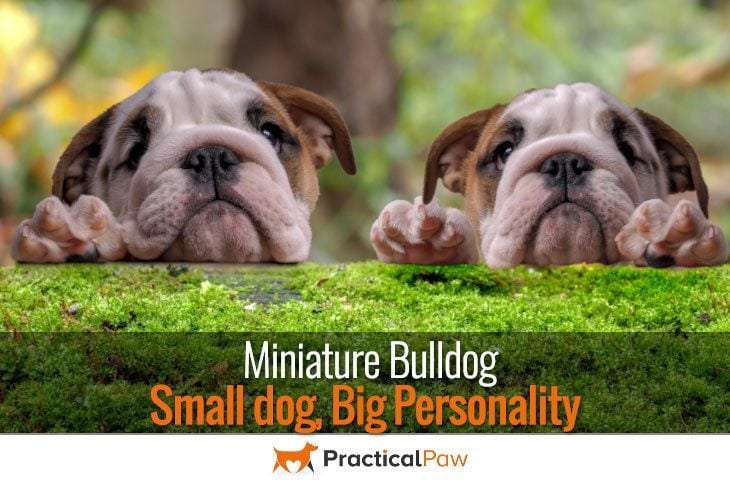 With its distinctive looks, winning personality and reputation for being both kind and loving, the Bulldog is a popular choice for families.

But, what do you do if your heart is set on a Bulldog but you don’t have room for this big, sturdy chunk of a dog? Enter the miniature bulldog, a smaller version of this ancient and beloved dog breed.

So, what exactly is a miniature Bulldog and how do you shrink the original without compromising its endearing character?

As always, looking at the breed history offers invaluable insight as to the personality of your dog.

However, the history of the Miniature Bulldogs isn’t simple. In fact, there is much controversy over this diminutive dog.

So, what’s the truth behind the miniature Bulldogs DNA and how can it help determine the personality of your new pup?

If a miniature Bulldog is on your wish list, it’s likely that you’ll end up with one of two choices. While some breeders choose small parent dogs to produce diminutive offspring, others cross the Bulldog with a slighter breed with similar characteristics like the Pug.

Either choice produces a dog that, in appearance is comparable to the Bulldog. However, crossing the Bulldog with another breed adds to the unique personality of this mix breed dog.

So, what can you expect from your miniature Bulldog and how does breed history influence the modern breed?

The Bulldog originates from Britain and is descendant of mastiff type dogs of the time. Originally bred to bait bulls, they were known as aggressive, tough and tenacious.

Larger than the modern dog, the Bulldogs descendants were taller, heavier and with a mighty bite that they used to hold onto the Bulls snout and bring them down to the ground.

In 1835, a law passed to ban bull-baiting, so the Bulldog lost its role as a fierce and courageous fighter. Fortunately, enthusiasts of the breed began to focus on producing Bulldogs as family pets.

As such, over time the Bulldog changed from aggressive bull baiter to the gentle family pet that we love today. Pugs originate from China and have a long history as a companion dog. Highly valued by Emperors, Royalty and Buddhist monks, Pugs are gentle, fun and devoted.

As a companion dog, they don’t have an urge to work as some dogs do making them an ideal dog for busy families and low energy owners. The miniature Bulldog, as you would expect looks much like its larger counterpart. Standing at around twenty-five to thirty-five centimetres tall and weighing in between eleven and eighteen kilograms miniature Bulldogs are a fraction of their full-size counterparts.

The head of the miniature Bulldog is large, broad and short-faced. Folds of skin hang loosely across the nose and head, and the ears are small and set wide apart.

The short, sleek coat of the miniature Bulldogs comes in a variety of colours including; brindle, solid white, red, fawn, piebald and black.

The Miniature Bulldog is thick-set, with broad shoulders, powerful forelegs and short back giving them a compact and stocky appearance.

While it sometimes looks as though Bulldogs don’t have tails, they do. Tail shape varies from straight to wavy to corkscrew but always stumpy and close to the body.

The mini Bulldog is playful, gentle, tenacious and loyal. If you’re looking for a high-energy companion for longs walks in the country, the miniature Bulldog is probably not the dog for you.

Ideal for families and low energy owners the miniature Bulldog is happiest with gentle walks and daily play time.

​The Miniature Bulldog at its Best Fun-loving, gentle and loyal. An ideal family-friendly dog that is patient and kind.

With a stubborn streak and independent nature, the miniature Bulldog is never the less loyal and protective of their family.

While the miniature Bulldog might be small in size, it’s big in personality and will challenge and amuse in equal measure.

Known to be patient and kind the mini Bulldog makes an ideal family pet as it is tolerant of both children and other animals in the home.

Adaptable and friendly the miniature Bulldog is a lot of dog in a small package. If you want a fun but challenging companion this diminutive dog could be a perfect choice.

​The Miniature Bulldog at its Worse A stubborn and cantankerous dog with a determination to rival even the most enthusiastic trainer.

With a stubborn streak and independent nature, the miniature Bulldog is never the less loyal and protective of their family.

While the miniature Bulldog might be small in size, it’s big in personality and will challenge and amuse in equal measure.

Known to be patient and kind the mini Bulldog makes an ideal family pet as it is tolerant of both children and other animals in the home.

Adaptable and friendly the miniature Bulldog is a lot of dog in a small package. If you want a fun but challenging companion this diminutive dog could be a perfect choice.

While the miniature Bulldog is not a natural athlete, they still need a daily walk. Thirty minutes of moderate exercise twice a day is ideal.

However, this may need to be reduced in very hot weather to prevent your miniature Bulldog from over-heating.

Playtime, training and other forms of mental stimulation will keep your dog happy when they can’t get out and about for a walk.

The grooming needs of the miniature Bulldog are low. Mini Bulldogs shed moderately throughout the year with an increase in spring and autumn.

The smooth, short hair doesn’t require much regarding coat care, a weekly brush with a firm bristle brush to remove any loose hair is usually enough.

However, extra attention is needed to look after those wrinkles. The deep folds can harbour bacteria as the warm, dark space is a perfect breeding environment. A daily wipe with a damp cloth or antibacterial wipes will keep those wrinkles clean.

Not only that but the miniature Bulldog needs a daily tooth brushing to keep that extra broad smile healthy and looking good.

As with all brachycephalic breeds, the miniature Bulldog has some health issues associated with breathing difficulties.

Not only that, but the potential health issues of the parent breeds are also worth noting as they can affect the offspring too.

While this list may look a little scary, your dog may not experience any of these issues. And if you decide that the miniature Bulldog is the right dog for you, expect to share your life with them for between nine and thirteen years.

Squashed face dogs are also sensitive to heat as they can’t efficiently cool themselves down.

Whether your miniature Bulldog is a mix of breeds or just a smaller version of the original, you are sure to fall in love with this little dog of significant character.

Playful, loyal, and gentle the mini Bulldog is a faithful family dog. The more you include your dog in everyday activities the happier your dog will be.

With a dislike of being left alone, the mini Bulldog is easy to look after with low exercise and grooming needs and is adaptable to most environments.

So, if you want a dog that is patient, kind and just a little bit stubborn the miniature Bulldog could be the perfect dog for you.