It can be really confusing knowing which foods are safe to give your dog. So we’ve put together our top nine things not to feed your dog and, most importantly, the reasons why.

You will probably have heard of someone that has fed their dog something on this list without any ill effects. But there are always exceptions to a rule. If you want to be completely safe, then only give food to your dog that has been especially made for dogs.

If you are tempted to share food with your dog, then there are much safer options than the nine items on our list. These include bananas, carrots and watermelon. These are safe and can add an exciting element to your dog’s day; either as a treat or included in their regular meals.

It’s relatively well known that onions are toxic to our dogs. When eaten by a dog, onions can cause haemolytic anaemia. There is a compound called thiosulphate which is found in onions that can cause damage to the red blood cells and trigger the blood cells to burst.

It takes very small amount of onion for it to be a danger. Around 15g can cause serious issues depending on the size of your dog. Onion can be found in a lot of foods, so be on the look-out for it especially in sauces, gravy and baby foods.

Symptoms to look out for are:

Onions are toxic to dogs in any form. This includes onion that is dried, powdered, raw and cooked. Because onions make an appearance in so many products, it makes the top of our list of things not to feed your dog.

Most people seem to be aware of the dangers of grapes and their dried counterparts, raisins. What isn’t so clear is why grapes and raisins cause such serious issues when eaten by dogs.

Research has yet to determine what is in the fruit that causes renal failure in dogs. In addition, to make the situation even more confusing, a study by the US Animal Poison Control found that it seems to only be around 1/3 of dogs tested that have a reaction to them.

However, only a handful of grapes or raisins (about seven grapes), it’s thought to be enough to cause potentially fatal renal failure.

It makes grapes number two on our list of things not to feed your dog. With so many other foods that your dog can eat, why risk your dog’s health with the chance that they may react adversely to them.

If your dog has accidentally eaten grapes or raisins look out for the following symptoms and contact your vet immediately:

Coffee, tea, some soft drinks and medication can contain caffeine. Caffeine contains compounds called Methylxanthines that act as both a stimulant and a relaxant.

Often used in medications, these compounds can be fatal to your dog. Although it may be tempting to give your dog the last drop of tea from your cup as a treat, think again. Caffeine can be fatal to your dog. If your dog swallows tea, coffee or any other product that contains Methylxanthines, you will notice symptoms of toxicity within 6 – 12 hours. As coffee is a stimulant, you may notice the following:

If you suspect your dog has had coffee or any other product that contains caffeine, don’t wait for symptoms to show up. Take your dog to the vet immediately.

Avocado is one of those foods that your dog may be sensitive to, even though it is not considered toxic. Avocados are toxic to horses, birds, cows and some other large animals because of a naturally occurring fungicidal toxin called Persin.

In dogs and cats, it seems that some are sensitive to Persin while others may suffer only mild stomach upset if they eat a large quantity of the fruit. The flesh contains less persin than the skin, but you are risking your dog’s health if you choose to give them avocado.

Avocado pits are tempting to some dogs and the bigger risk is that once eaten, they can create serious issues by causing an obstructions in your dog’s oesophagus, stomach or intestinal tract.

If your dog has eaten avocado and they exhibit any of the following symptoms then do take your dog to the vet:

Despite avocado being classed as non toxic to dogs, it still makes our list. Why take the chance when there are alternative treats out there that are considered totally safe for dogs. 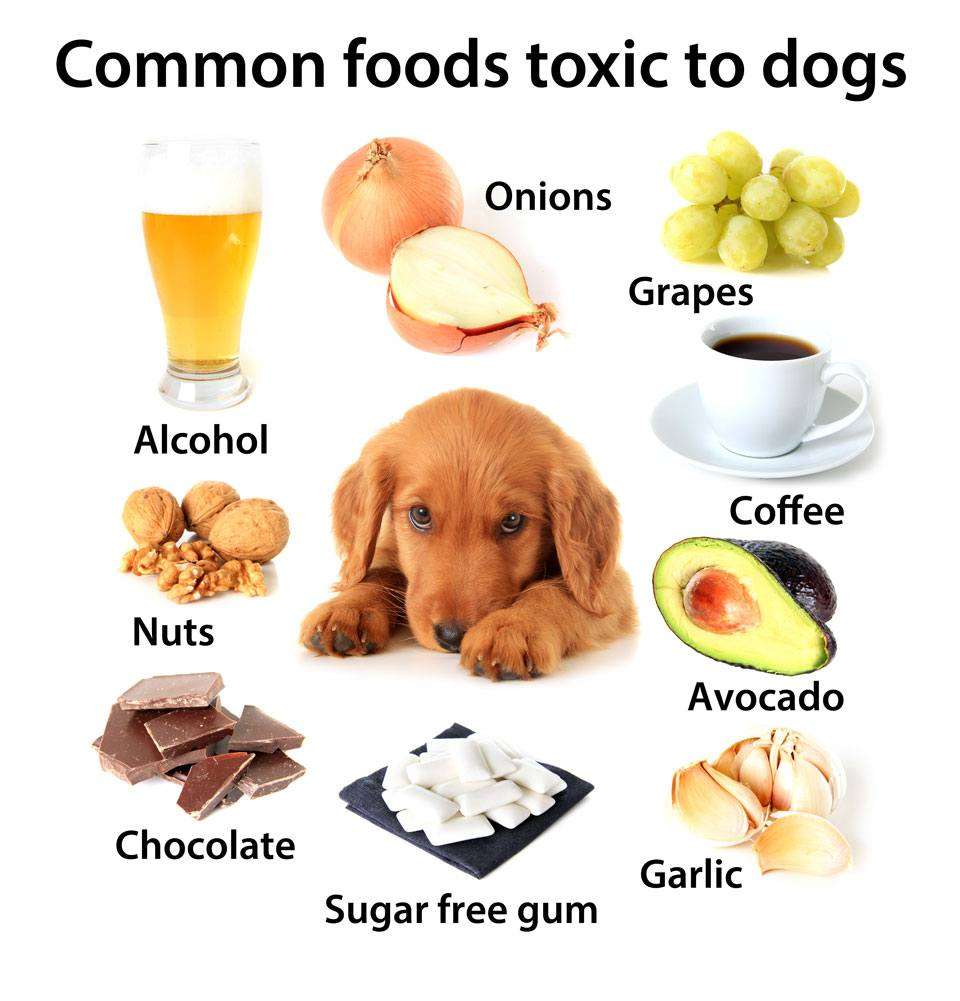 You may find lots of information about the positive uses of garlic. This includes treats containing garlic that claim to act as a natural flea deterrent, it’s important to note that garlic is toxic to dogs.

Garlic can cause major problems for your dog even if it’s in small doses. Typical symptoms of an adverse reaction include:

The destruction of red blood cells can be at a sub-clinical level. This means that the damage is happening despite your dog not showing any outward symptoms. Damage at this level can only be seen under the microscope or in laboratory tests.

I can’t imagine why anyone would want to give their dog sugar free gum, but it makes our list because of Xylitol, one of the gum’s main ingredients.

Xylitol finds its way into a lot of food as an alternative to sugar. Although it occurs naturally in some fruits and vegetables, it is extremely toxic to dogs.

Many sweets, breath mints, toothpaste and baked goods contain Xylitol as well as a lot of reduced sugar options on the market including peanut butter.

When ingested by dogs, Xylitol is absorbed by the bloodstream and creates a huge spike in the release of insulin. This surge of insulin results in a dog’s blood sugar level dropping to critical levels (this is known as hypoglycaemia).

If your dog has eaten Xylitol, the symptoms will occur within 10-60 minutes and you should be on the lookout for:

It only takes a small amount of Xylitol to present a danger to your dog. One piece of gum is enough to cause problems for a small dog. As Xylitol toxicity is life threatening, you should be on the lookout for Xylitol. It can be found in common foods that use low sugar alternatives, as well as candy, sweets and gum.

Chocolate not only contains caffeine but also something called theobromine. Both of these are stimulants. Just as with coffee, if your dog eats chocolate it can be life threatening.

The darker the chocolate the more theobromine it contains. The most dangerous types being baking chocolate or high quality dark chocolate. With this in mind, white chocolate is the least dangerous product.

If your dog has eaten chocolate they may exhibit the following symptoms:

We recommend that you contact your vet immediately if you suspect that your dog has eaten any of the foods on this list.

There is only one type of nut that you can safely give to your dog and it isn’t even a nut! So here are our nutty facts. Peanuts, often given to dogs in the form of peanut butter is in fact not a nut but a legume. As long as it’s natural and does not contain Xylitol, your dog can enjoy it in moderation.

Although some nuts such as hazelnuts, almonds and pistachios are not strictly toxic, they can cause stomach upsets as they are hard to digest and are very high in fat contributing to health issues such as pancreatitis. Owners may also find that nuts present a choking hazard to smaller dogs.

Despite nuts containing these toxins, the far greater risk for dogs is if the nuts become mouldy. A Mycotoxin called Penitrem A   that is produced by the mould and can be fatal if swallowed.

Symptoms to look for if your dog has ingested nuts are:

According to Nationwide Pet Insurance, walnut poisoning is one of the most common claims among dog owners. We recommend that you take nuts off the menu in order to keep your dog safe and avoid big bills from the vet.

Alcohol is toxic not only to our dogs but also to ourselves. Although humans have adapted to be able to drink it, our dogs haven’t. All alcohol will have a devastating effect on your dog.  Toxicity depends on body weight and our dogs have much less than we do.

This means that it only takes a small amount of alcohol to cause serious issues for your dog. Beer and wine are particularly bad as both hops and grapes are toxic to dogs; even before the alcohol has been produced.

Symptoms of alcohol poisoning can include:

If you are in any doubt whether your dog has had access to alcohol, take them to the vet immediately. Not only is your dog susceptible to short term toxicity but also to long term damage if you don’t act quickly.

Things not to feed your dog

There you have it, 9 things not to feed your dog and hopefully good enough reasons to stay well clear of them.

There are things on our list that are, in the strictest sense, classed as non toxic such as avocado. However due to the number of dogs sensitive to them or the choking hazard they present we have included them.

With so many beneficial fruits and vegetables that you can safely give your dog as a treat there really isn’t any reason why you need to stray into unsafe or even strongly debated territory.

Keep your dog safe and remember that even if a food is considered safe, your dog may still have a reaction to it. Always introduce new foods a little at a time and monitor for any adverse effects.